The communist regime did not tolerate listening to Western music. They believed that the live concerts of imperialist artists were taboo. So how is it that on March 11, 1988 Depeche Mode was allowed to come to the Sports Hall in Prague of then-called Czechoslovakia?

The Depeche Mode concert in the CSSR is one of those events considered legendary. The communists could say they would not allow such music, but in Czechoslovakia at that time, Depeche Mode was an enormous cult. Their supporters gathered in various underground clubs and listened to their music. You can imagine when word got out that Depeche Mode would be perform in in Prague, they could hardly believe it. They were not alone. The organizers and public security forces could not believe it either!

Unlike the enthusiastic musical fans, the officials were absolutely horrified. Everyone believed it must be some kind of trap. After all, they were an imperialistic British band and their supporters wore all black. Their hair was worn in punk hair styles – and to the average Joe – the fans were scary! The executives of Pragokoncert were afraid that the Sports Hall would not physically be able to withstand the raging hordes, and regretted that they had arranged the concert.

The period materials of the time have funny interviews with the organizers, such as the one with the Deputy Director of the Sports Hall Dana Hálová. She revealed that the security measures at the concert will be extraordinary. When asked by the journalist how much extraordinary she said, “Extremely extraordinary.”

A certain police officer in charge of the concert was noted as saying, “Have you seen hairstyles on the heads of those standing outside?” They were referred to as ‘idiots’.

Vendors who were sent to the few places where tickets were sold, had to be specially and thoroughly trained in how to deal with drug addicts, alcoholics, punks, freaks, and other ‘troubled individuals’. To their great surprise, masses of ‘normal people’ were interested in buying tickets, too.

Interested people smothered the points of sale and slept in the frosty weather on the street. But as they did and the excitement began to build, their doubts grew. Was it all a sham? What would happen if the concert was abruptly cancelled? Of course, opportunists also existed at the time. There was talk of a man who sold ten thousand fake concert tickets worth two and a half million crowns. Apparently, he escaped the eager search of their elite detectives.

The interest in tickets was enormous. The arena capacity had tickets for 13,000, yet over 90,000 requests came to the Pragokoncert offices. In total, including other sellers, a total of over 250,000 people wanted to attend the concert.

Those are very Interesting numbers, considering that Depeche Mode records were not sold there at the time and their music video clips were not being broadcasted.

In the end, the historic concert did take place. And as a big surprise to all of the communist officials, the concert was 100% trouble free. Each and every fan behaved in a very sophisticated and civil way rendering all of the extra and specially trained security forces (including the public Prague 7 corps) completely unnecessary.

Note: The Czechoslovak Socialist Republic (Czech and Slovak: Československá socialistická republika, ČSSR) was the name of Czechoslovakia from 1948 to April 23, 1990, when the country was under communist rule.

The Beat Generation In Prague – Expression Behind the Iron Curtain

Make sure to visit our Music Archives to see many more posts like this. 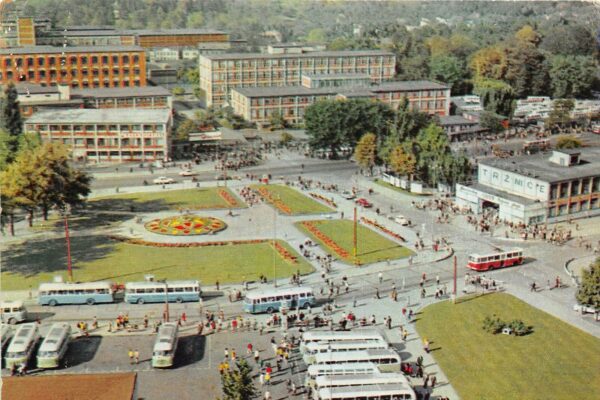 Strange Postcards from the Communist Era