It’s amazing to be able to watch a rare film of Tomas G. Masaryk, the Father of Czechoslovakia, speaking English for “Fox Movietone News” on November 29, 1929.

But perhaps more amazing is what he actually SAYS in the clip.

“If I observe the inventiveness of our modern scientists, I sometimes fancy a much greater invention, to see and hear in the distance without any wire. Just imagine. You could observe from your place, say in the sitting room, the jungles of Africa, what the wild beasts are doing there. And more, you could see in distances, to the jungles of our human society. Every man then, would be forced to be honest. And there would be no secret plotting anymore of all the wickedness. Wonderful, no?”

Is he really talking about wireless technology and another level of Google earth, one where we can watch in real time – live – the goings on of wherever we wish to see on the planet?

What is he speaking of? 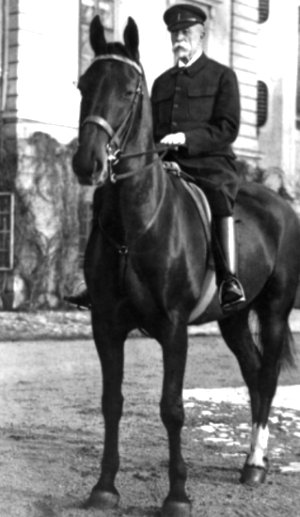 “And then, now you have at the home, a lot of your own prophets, analyzing, criticising, your life in America. The development of your country and I read a good deal of the books dealing with your problems. The Europeans can learn a bit of you Americans, I myself learned something in Washington that a good horseman told me, that riding you get twice as much pressure in your than walking, so I am going to have my morning ride.”

“Goodbye and Thank you…”

“… and remember our watchword, cooperation not competition.”

He was a Czechoslovak politician, sociologist and philosopher, who as an eager advocate of Czechoslovak independence during World War I became the founder and first President of Czechoslovakia.He originally wished to reform the Austro-Hungarian monarchy into a democratic federal state, but during the First World War he began to favour the abolition of the monarchy and, with the help of the Allied Powers, eventually succeeded.

Masaryk’s life motto was “Do not fear and do not steal” (Czech: Nebát se a nekrást). He was a philosopher and an outspoken rationalist and humanist, he emphasised practical ethics, reflecting the influence of Anglo-Saxon philosophers, French philosophy, and especially the work of 18th Century German philosopher, Johann Gottfried Herder, who is considered the founder of nationalism. He was critical of German idealistic philosophy and Marxism.

After death of Tomas.G.Masaryk´s wife Charlotta Garrigue-Masaryková (who was born in Brooklyn, New York), Alice Masaryk continued with the role of the First Lady.

His daughter Alice was the founder of Czech Red Cross.

We love to share and feature unique and amazing things, especially in relation to Bohemia so if you have a tip for us, please do tell us about it. We also love reading your comments….