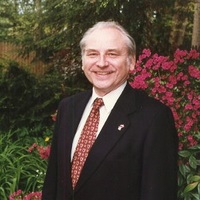 Miloslav Rechcígl, Jr. is one of the founders and past Presidents of many years of the Czechoslovak Society of Arts and Sciences (SVU), an international professional organization based in Washington, DC. He is a native of Mladá Boleslav, Czechoslovakia, who has lived in the US since 1950. After receiving a scholarship, he went to Cornell University where he studied from 1951-58, receiving his B.S., M.N.S., and Ph.D. degrees there, specializing in biochemistry, nutrition, physiology, and food science.

He then spent two years conducting research at the National Institutes of Health as a postdoctoral research fellow. Subsequently he was appointed to the staff of the Laboratory of Biochemistry at the National Cancer Institute (NCI).  For some 10 years, while he was at NCI, he conducted extensive research relating to cancer biochemistry and enzyme turnover in vivo.

During 1968-69 he was selected for one year of training in a special USPHS executive program in research management, grants administration, and science policy. This led to his appointment as Special Assistant for Nutrition and Health in the Health Services and Mental Health Administration. In 1970 he joined the Agency for International Development, US Department of State, as Nutrition Advisor and soon after was promoted to the position of Chief of Research and Institutional Grants Division. Later he became a Director with the responsibility for reviewing, administering and managing AID research.

He is the author or editor of over 30 books and handbooks in the field of biochemistry, physiology, nutrition, food science and technology, agriculture, and international development, in addition to a large number of peer-reviewed original scientific articles and book chapters.

Apart from his purely scientific endeavors as a researcher and science administrator, Dr. Rechcigl devoted over 50 years of his life to the Czechoslovak Society of Arts and Sciences (SVU). In 1960-62 he served as secretary of the SVU Washington D.C. Chapter. He was responsible for the first two Society’s World Congresses, both of which were a great success and which put the Society on the world map. For a number of years, he then directed the publication program of the Society.

He also edited the Congress lectures and arranged for their publication, under the title The Czechoslovak Contribution to World Culture (1964, 682 p.) and Czechoslovakia Past and Present (1968, 2 volumes, 1900 p.). The publications received acclaim in the American academic circles and greatly contributed to the growing prestige of the Society worldwide.

Dr. Rechcigl was also involved, one way or another, with most of the subsequent SVU World Congresses, including the recent SVU Congresses in Prague, Brno, Bratislava, Washington, Plzeň, Olomouc and České Budějovice.

Together with his wife Eva, he published eight editions of the SVU Biographical Directory, the last of which was printed in Prague in 2003. He was instrumental in launching a new English periodical Kosmas – Czechoslovak and Central European Journal. It was his idea to establish the SVU Research Institute and to create the SVU Commission for Cooperation with Czechoslovakia, and its Successor States, which played an important role in the first years after the Velvet Revolution of 1989. Under the sponsorship of the Research Institute he and his colleagues conducted a series of seminars about research management and the art of ‘grantsmanship’ for scientists and scholars, as well as for the administrators, and science policy makers, at Czech and Slovak universities, the Academies of Sciences and the Government.

He was also instrumental in establishing the National Heritage Commission with the aim of preserving Czech and Slovak cultural heritage in America. Under its aegis, he has undertaken a comprehensive survey of Czech-related historic sites and archival materials in the US. Based on this survey, he has prepared a detailed listing, Czech-American Historic Sites, Monuments, and Memorial’ which was published through the courtesy of Palacký University in Olomouc (2004). The second part of the survey, bearing the title Czechoslovak American Archivalia, was also published by Palacký University (2004).

In this connection, he also organized several important conferences, one in Texas in 1997, the second in Minnesota (1999), the third in Nebraska (2001), and the fourth in Iowa (2003). Through his initiative, a special Working Conference on ‘Czech & Slovak American Materials and their Preservation’ was also held at the Czech and Slovak Embassies in Washington, DC in November 2003. It was an exceptionally successful conference which led to the establishment of the new Czech & Slovak American Archival Consortium (CSAAC). Later, he also organized, jointly with the ACSCC of North Miami, a conference on ‘Czech and Slovak Heritage on Both Sides of the Atlantic’, 17-20 March 2005. The conference was co-sponsored by the US Commission for the Preservation of America’s Heritage Abroad, under the aegis of both Presidents of the Czech and Slovak Republics.

Among historians, Dr. Rechcigl is well known for his studies on history, genealogy, and bibliography of American Czechs and Slovaks. A number of his publications deal with the early immigrants from the Czech Lands and Slovakia, including the migration of Moravian Brethren to America. In the last few years he has been working on the cultural contributions of American Czechs and Slovaks. A selection of his biographical portraits of prominent Czech-Americans from the 17th century to date has been published in Prague, under the title Postavy naší Ameriky (Personalities of our America) (2000; 350 p.) On the occasion of his 75th birthday, SVU published a collection of his essays, under the title Czechs and Slovaks in America (2005; 316 p.).Three years later, he published a voluminous monograph, On Behalf of their Homeland: Fifty Years of SVU, an eyewitness account of the history of the Czechoslovak Society of Arts and Sciences (2008; 671 p, 28 p. ill.). And finally, on the occasion of his 80th birthday, the SVU published his personal memoirs, Czechmate, From Bohemian Paradise to America Haven (2011). ). In the same year, Rechcigl published his unique Czech American Bibliography. A Comprehensive Listing with Focus on the US and with Appendices on Czechs in Canada and Latin America (2011).

In 1991, on the occasion of its 100th anniversary, the Czechoslovak Academy of Sciences awarded him the Hlávka Memorial Medal. Subsequently he was also given the Bolzano and the Comenius Medals. In 1998 he received a newly established prize “Gratias agit” from the Czech Minister of Foreign Affairs. More recently, he was given an honorary title Admiral of the Nebraska Navy by the Governor of Nebraska and the key to the Capital of Nebraska by the Mayor of Lincoln and the SVU Prague Chapter awarded him ‘2002 Praha SVU Award’. In 2005, Minister of Foreign Affairs of the Czech Republic honored him by awarding him Jan Masaryk Medal for his contributions in preserving and fostering relations between the Czech Republic and the United States. In February 2010, President of the Senate of the Parliament of the Czech Republic presented him a Silver Medal of the Senate for his efforts on behalf of Czechs abroad and for fostering of good name and the traditions of the Czech Republic.  In 2012, he was awarded by the Minister of Interior of the Czech Republic, Jan Kubice, a medal for his lifetime contributions to the Czech archival science.

Mila’s books are available on Amazon.com.

You can also visit his personal website at MilaRechcigl.com.

Mila’s articles at this site: