This select group of young singers, predominantly girls aged 12 to 20, was capable of meeting all artistic challenges on a high level thanks to the professional guidance of its leaders at the time, Bohumil Kulínský and Blanka Kulínská.

Bambini di Praga have been a guest on many stages around the world – in Paris, Berlin, Rome, Helsinki, Leipzig, Tokyo, New York, Osaka, Hong Kong, Jerusalem, Monte Carlo, Abu Dhabi, Boston, Johannesburg, Oslo, Seoul, Shanghai, Taipei, and elsewhere – and collaborated with leading Czech symphonic orchestras such as the Prague Symphony, the Prague Philharmonia, and the Czech Philharmonic Orchestra among others. It regularly enriched Prague concert life and appeared in musical programs of both Czech and foreign radio and television stations.

The members of the Bambini di Praga’s concert choir were selected from among the best graduates of the private School of Choral Singing of the Bambini di Praga. This school offered children aged 5 to 12 not only the main subject of choral singing but also instruction in the basics of music theory, intonation and rhythm, recorder-playing, the English language, and motion training.

The greatest emphasis in the Bambini di Praga choir was on uniform vocal training, which has a decisive influence on the choir’s overall sound image. Vocal training, which is a regular component of rehearsals, was exclusively the work of the choir’s two leaders. In the interest of uniform vocal technique, members of the Bambini di Praga choir were not allowed to study with other voice teachers.

It was for this reason that the choir’s vocal quality, along with intonational purity and technical surety, were the most common topics of discussion in admiring reviews by domestic as well as foreign critics.

The repertoire of the Bambini di Praga was very extensive and was characterized by variety and diversity of genre. The young singers performed even completely divergent musical styles, not excluding pop music and jazz, with absolute assurance and tremendous musicality.

From their show “Around the world with Bambini di Praga”, which was performed at the opening concert of “Praga Cantat, 2008”.

The repertoire included works of the vocal polyphonic style and of the classical period, songs of the romantics, choral works of the nineteenth and twentieth centuries, folk songs from nations all over the world, Christmas carols of Europe and America sung in the original languages, and of course, the much loved folk songs of Bohemia, Moravia, and Slovakia.

A wonderful Christmas album was recorded in 1982 and you can hear all of it here:

The renowned children’s choir Bambini di Praga finally ceased its activities after 38 years of performances. They performed their last concert in the Municipal Library on Marianske namesti in Prague 1 on June 28, 2011. According to Jana Puterová, the choir had to end because social circumstances did not allow them to continue their activities.

The last concert ended with a few minutes of standing applause and ovations. Many from the audience carried large bouquets of flowers to the choirmaster Blanka Kulínská and thanked her for her dedicated years of hard work. After the concert, Kulínská refused to communicate with the media, only saying that she feels tired after 40 years. “Bambini di Praga is completely shutting down, the choir school has been closed years ago….”

The final two-hour concert culminated in an unconventional extensive medley of songs from five continents called “Let’s World with Bambini di Praga”, where the talented choir sang each in their original languages. The audience also actively joined the choir in a number of compositions.

Tragically, the choir was terribly damaged behind closed doors. Kulínská placed the bulk of the blame on journalists, citing things “that it do not exist. We had no ‘admissions’, and when there is no youth, there can be no membership,” These were Kulínská’s comments before the concert. “The media did not understand the feeling of injustice at all, and did not feel the situation.”

What was she talking about?

What was lurking behind the iron curtain at that time?

Apparently, the Bambini di Prage Children’s Choir had for many years been damaged mainly due to the case around her son and the former choirmaster, Bohumil Kulínský.

On November 25, 2004 Bohumil Kulínský was arrested for the sexual abuse of minors in the early 1990s; the charge was extended to 49 cases during the investigation between 1984 and 2004 . The case attracted great media and public interest. Finally, Bohumil Kulínský in January of 2009, he was sentenced to five and a half years in prison for proven sexual abuse of 23 girls. Eight of girls were not yet 15 at the time of abuse.

Bohumil Kulínský was known as a Czech chorus master. He was the founder and leader of Dětský Sbor Čs. Rozhlasu and its successor Bambini Di Praga until 1977. He died September 15, 2018 in Prague of acute renal failure. Kulínský always denied his guilt, but was sentenced to 5.5 years in prison. There are literally hundreds of articles about this in Czech, some with headlines such as “consider where you’re sending your girls to camp”. Later media said that he “had a condition” and that was apparently the reason for the short sentence. Unbelievably, they released him on a “conditional release” and he was able to conduct again, which I find revolting, especially reading that he had a standing ovation at that performance. Somehow, in a totally hypocritical decision, he was innocent enough to perform and yet all of those who were under 18 years of age had to leave the auditorium. In all the articles I read in researching this, I never once read about him mentioning regret or sorrow. There was a headline where he was focusing on trying to start another choir in prison, and one where he’s quoted “I lost a lot of money“.

“Given the number of abused girls, this is a low punishment,” said Marie Benesova. And I am shocked at how the judge responded when discussing the case. “It happened long ago”, “He has lived a respectful life in the decade after the abuses occurred”, and so on. I wonder what the #metoo movement would have to say reading some of the old testimony from the case and his obvious lack of punishment. He walked on parole after just serving 3 years, meanwhile 49 young women’s lived were irrevocably altered.

There is a book entitled Bambini di Praga which attempts to map the history of the musical ensemble through which thousands of child singers have undergone, and which are undoubtedly written into life. The Bambini di Praga choir, which gained world renown, became a phenomenon of musical life of the last and this century, and then suddenly fell into a sewer of tabloid rampage.

The book contains rich accompanying material from the archives of the Kulínský family including photographs, concert programs, choir awards, period documents from the press, radio and television, as well as memories of former and current members and collaborators of the choir.

The author of the above book, Jitka Škápíková, also collaborated with Bohumil Kulínský and they co-wrote a book called Volný pád (or Free Fall), which you can see here. She said after his death, “Kulínský had absolute power in the choir, he was a god for the girls…” Her daughter was in the choir.

In any case, he’s dead now. He died at the age of 59 with a final headline that “he destroyed his mother’s entire life“. Hers and numerous others’ I am sure – but his evil deeds should not take way from the beauty of the singers voices. Nor should the scandalous headlines take away from their commitment, hard work, dedication and immense talent.

An interesting article I came across introduces us to one of the former Bambini di Praga singers as an adult woman. She’s been singing since the age of seven and has formed a new choir. The choir is called Cancioneta Praga and it’s formed by selected chorus singers of Bambini di Praga and Radost Praha choirs who no longer sing for children’s choirs. The choir was formed in 2010. You can read about them here.

Finally, we invite you to browse several of Bambini di Praga CDs (and even vintage albums) at this link. And remember, your purchase through this link supports the ongoing maintenance of this site. 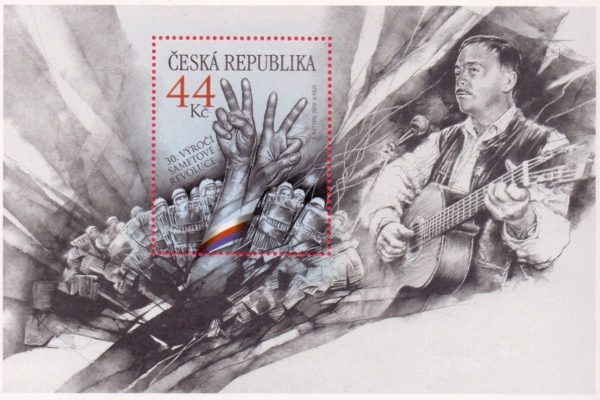 Voice of the Velvet Revolution
COMMENTS 0