The Moose Are Loose in the Czech Republic

If you are visiting the Czech Republic and driving on their roads, you may soon come across a new, perhaps somewhat surprising, traffic sign… 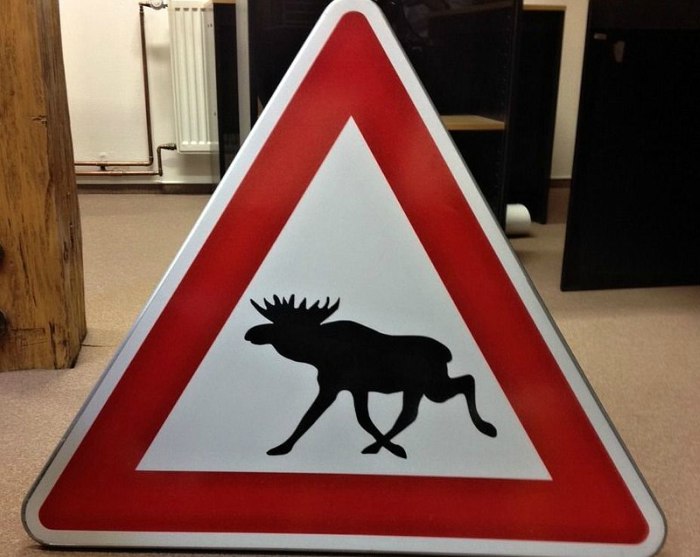 That’s right. It is a moose crossing warning.

Are they preparing for some kind of North Woods Law episode in the heart of Bohemia?

There are moose in the Czech Republic?

A non-profit organisation, Česká Krajina (Czech Landscape), has recently proposed that road management authorities should place the traffic signs in regions where an encounter with these rare animals  are most likely to happen. In an interview with Miloslav Jirků from the Czech Academy of Sciences, he said, “We proposed the sign as a warning to Czech drivers that there is actually a very unusual and large animal living with us and crossing our roads: the moose. It is actually the rarest, big animal living in the Czech Republic.”

The fact is, at last count there were approximately 50 moose in Czech lands. Throughout Europe, moose are currently found in large numbers in Norway, Sweden, Finland, Poland, and the Baltic States. They do also show in the Ukraine, Belarus and the southern part of the Czech Republic. In Europe, they are called Eurasian Elk.

But if there are only 50 moose in the entire county, then what is the likelihood of a traffic accident involving a moose?

Jirků informs us, “It depends when and where. In most parts of the country it is quite unlikely. It is more likely in particular regions in the southwest of the country, along the borders with Austria and with German Bavaria, especially in the region of the Šumava mountains in the very south and around the towns of Jindřichův Hradec and Český Krumlov.”

I’m sure that people would be most surprised if they say this crossing the road. 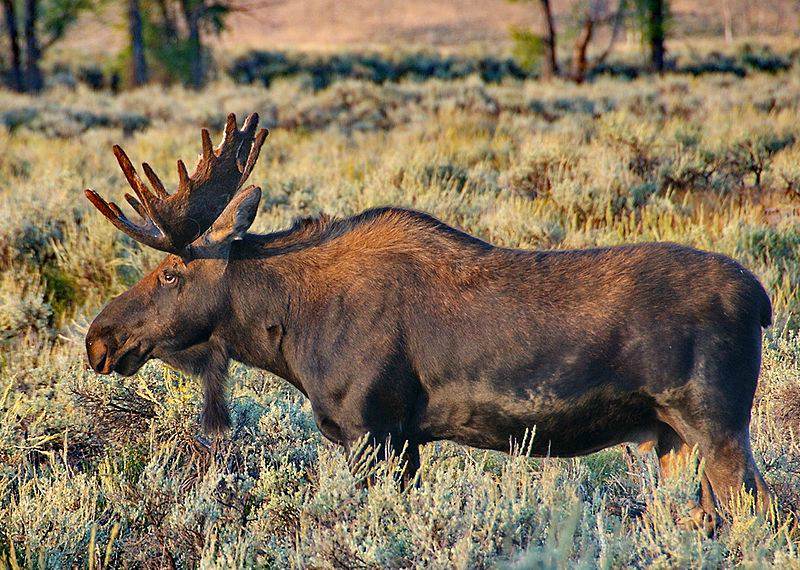 I also feel that most people (locals and tourists) would probably think the sign is some kind of a joke. Another Czech Dream of sorts.

Because most people simply have no idea that these animals live there.

So the next obvious question would be ‘have they always lived there?’

Well, moose (or Eurasian Elk) are found in a range of woodland habitats, both coniferous and broadleaved, from the tundra and taiga southwards through boreal to temperate zones. They tend to prefer damp, marshy habitats and areas in close proximity to water. They are also found in open country in the lowlands and mountains, including farmland, if there is forest nearby. 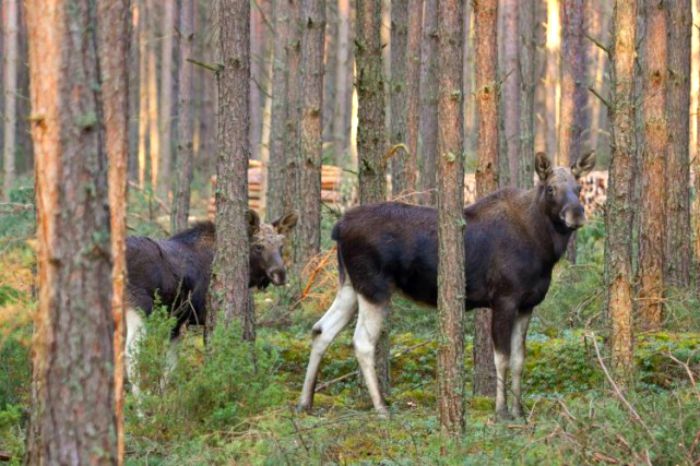 They have lived in the Bohemian region currently occupied by the Czech Republic until the late Middle Ages, until the 15th or 16th century, when it was driven to extinction, most probably by over-hunting. 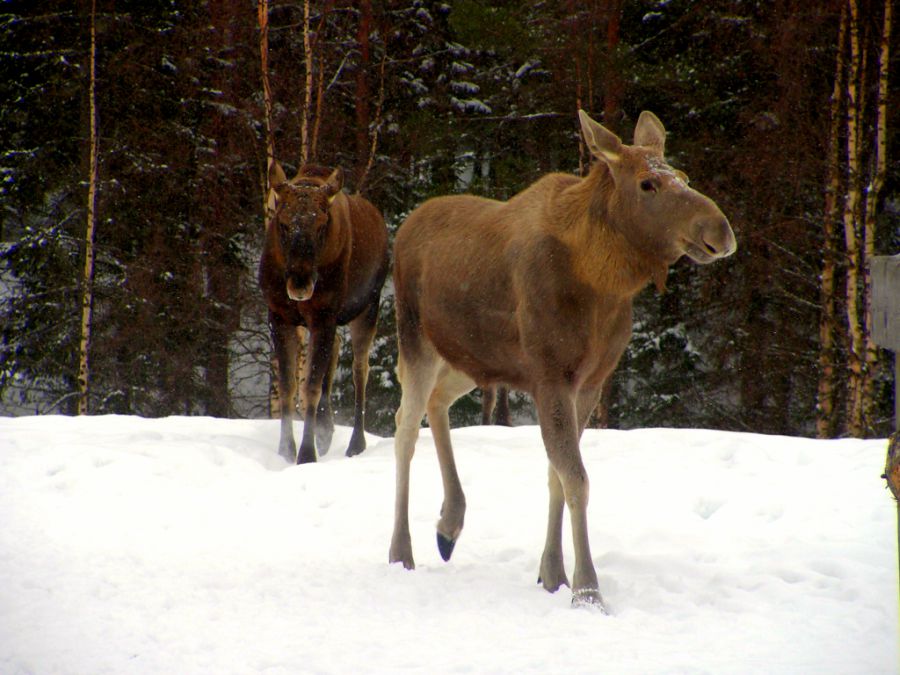 Moose (Eurasian elk) like to browse for food. They feed on the vegetative parts of trees, shrubs, dwarf shrubs, herbs, and aquatic plants. They can be viewed as a nuisance or pest to the departments of agriculture and forestry.

The species has seasonal movements in parts of its range, particularly in northern Europe. This means that they forage for and follow the food. 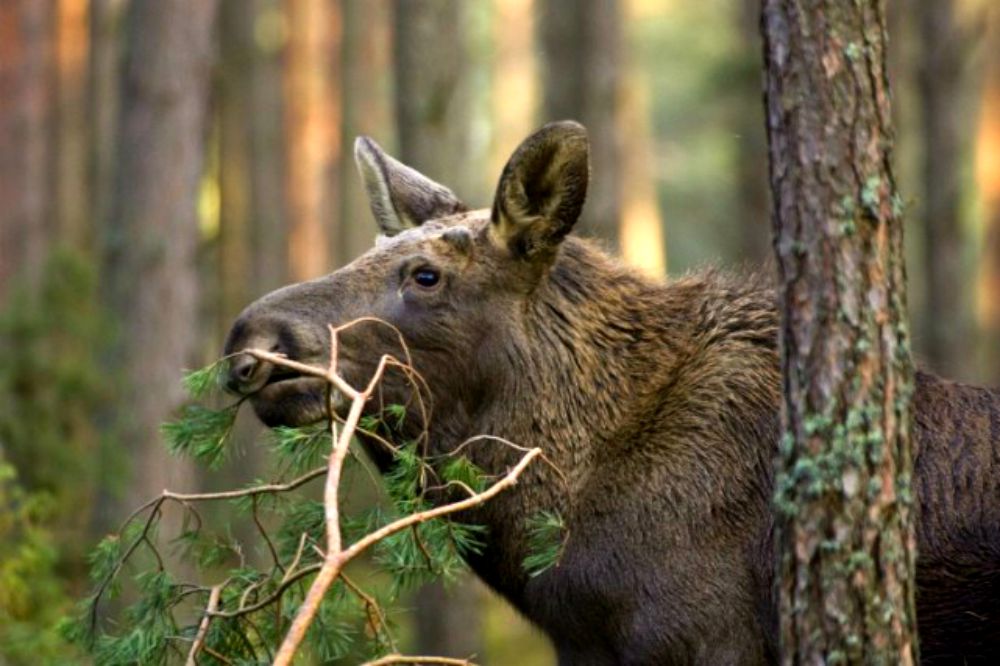 Just like American Moose, Eurasian elk are mostly diurnal. They are generally solitary with the strongest bonds occurring between a mother and her calf. Though two individuals can sometimes be found feeding along the same stream. 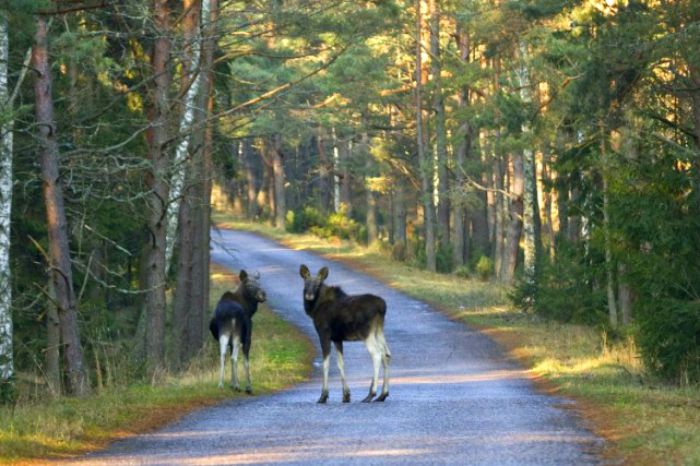 Throughout Europe, the moose has a continuous distribution extending through Norway, Sweden, Finland, Russia, the Baltic states, Belarus, Poland and northern Ukraine. There are three isolated subpopulations in southern Czech Republic, and the species is even occasionally recorded in Germany, Croatia, Hungary and Romania. It has been extending its range southwards along the rivers into the northern Caucasus lowlands. It ranges from sea level up to at least 1,500 m in Europe, and up to 2,500 m in the Altai mountains of Central Asia. 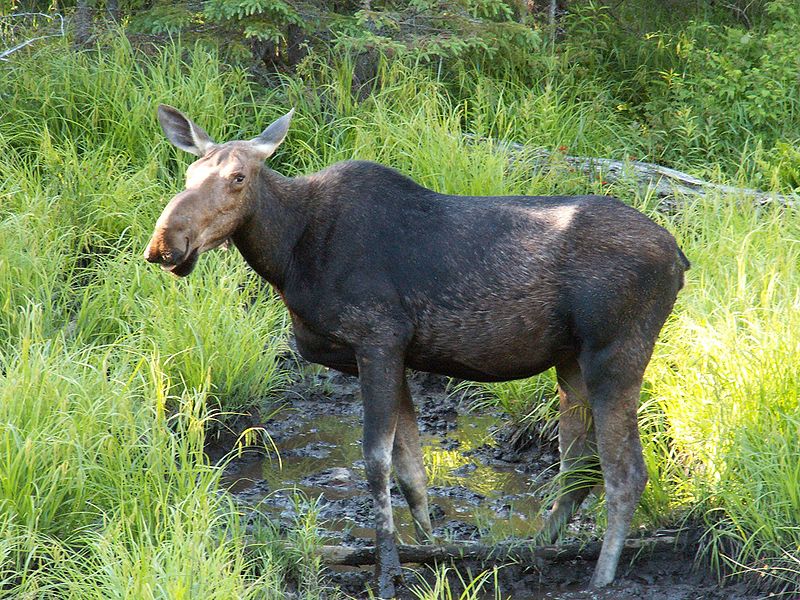 The great news is that the moose seems to be returning spontaneously without any human intervention after such a long period of absence.

The first animals started to migrate from south Poland towards the Czech Republic and the migrations continued until around the year 2000 when it suddenly stopped. Some say that their resurgence is most likely related to the construction of a highway connecting Berlin with Wroclav, Krakow and Ukraine. 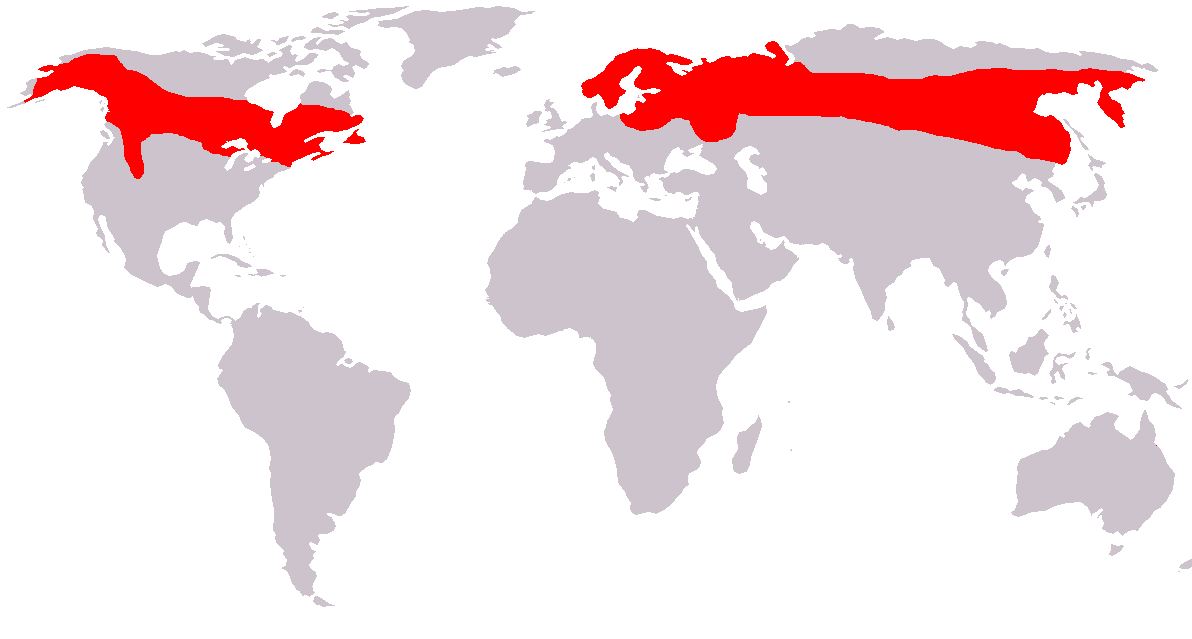 Apparently, the highway passes along the southern border of the moose range in Poland so the Polish and Czech populations have become isolated from each other and new movement patterns were likely established.

We are not too worried about how they came back – we’re just happy that they did and we agree with the signs to warn people. If you think about it, it’s actually quite amazing that these migrating moose ended up in the region of southern Bohemia in the Šumava mountains. They seem to be fond of the countryside which is hilly and quite forested. But what is more important for moose is that it is an area with very low human presence with lots of bushes to browse. 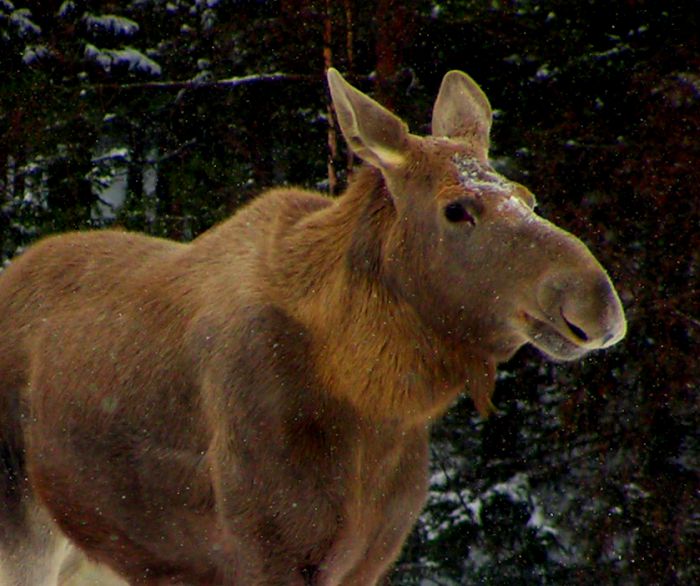 Let’s just hope that hunters or poachers don’t get them and they can replenish and grow or the Czech Republic will have to think about getting some game wardens of their own to watch and guard over these majestic gentle giants.

But the road is where the real danger is – to both moose and motorists. So what is the most likely encounter with one of these moose?

You guessed it. On the road.

In recent years, there have been twelve incidents since 1975. Two of those occurred on railroad tracks and the rest were in the road.

What does this mean? It means that the signs are a great idea to protect both people and animals. 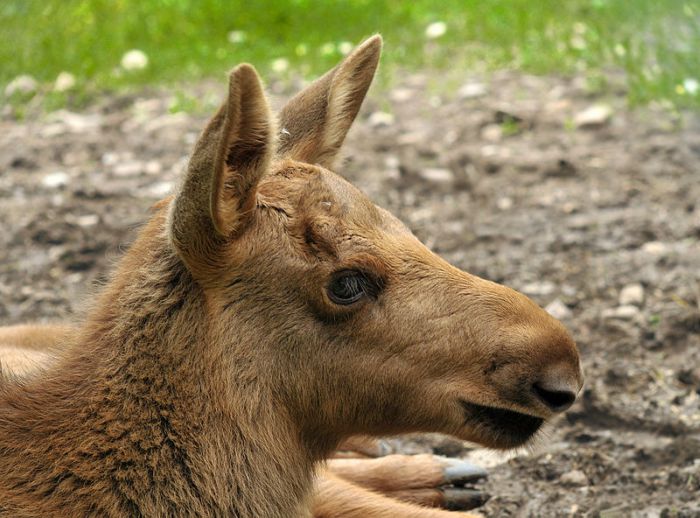 Oh my God… they are so cute!

Miloslav Jirků warns that the population was at its peak in the 1980’s and 1990’s when there were between 30 and 50 animals. But the past twenty years has begun to show a decline again, and he says that he estimates between 20-30 moose at best.

Are they leaving and not coming back? Are they being killed on roadways and by hunters and poachers and not being reported? Maybe they do not breed in the Czech Republic at all and are simply having their babies in greener pastures in other countries.

Jirků believes that the migrations from Poland probably stopped completely by the year 2000. He also shares that hunting is a likely factor, “There are two ways that moose are shot. Either by poachers, which is hard to monitor, but there is also legal culling of moose in Austria and Bavaria, because local authorities there permit it in case the moose cause damage to agricultural crops and planted forests. To improve the situation we need to communicate with the German and Austrian authorities.”

With such low numbers, the moose is actually endangered in the Czech Republic.

So what are they doing to protect the endangered moose?

Miloslav Jirků  says, “In the Czech Republic moose are concentrated the Šumava mountains, in a countryside that is rather hilly and quite forested. First we made a review of all records of moose in the Czech Republic to have a general picture of their occurrence in time and space and we also started a pilot monitoring project using camera traps, but that proved rather inefficient because moose, unlike other game species, don’t tend to use regular paths. They move through the same place using different trails. We are currently testing a different way of monitoring the moose. We started quite an unusual collection of moose samples and for that we are using a great tit, a small and very common bird, which has a very special skill: it is able to collect hair of wild animals around its nest. So we started to collect the birds’ empty nests in certain localities and they are now being genetically analysed. So we shall see in a few months what comes out of it.” 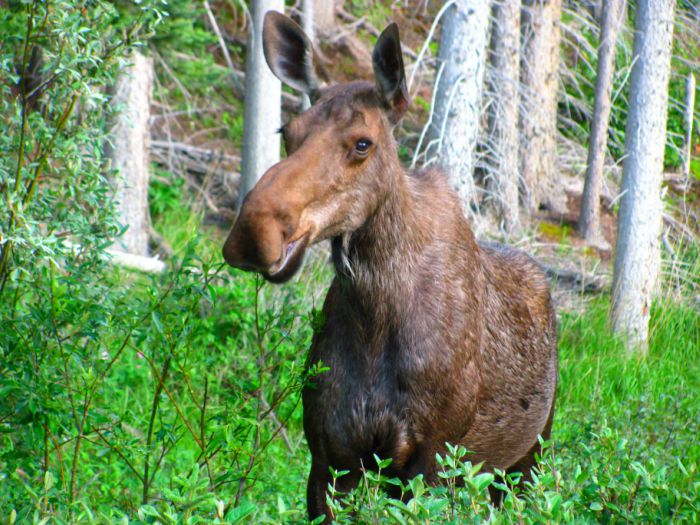 Update: As a result of preliminary testing, it is now believed that there are between 50-80 wild moose currently living in the Czech Republic. 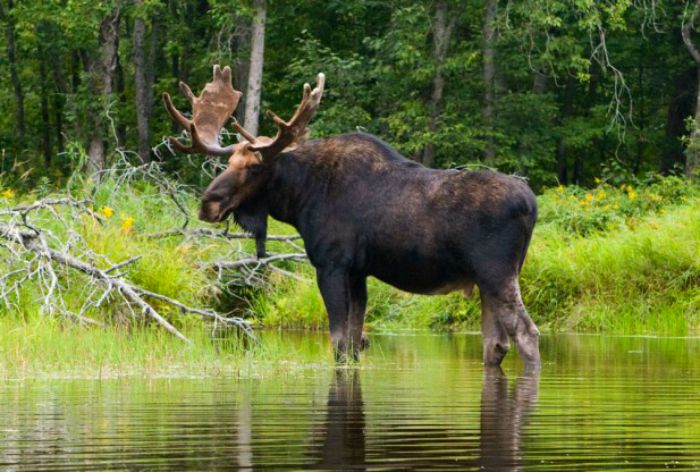 Now if only we could get some of those handsome North Woods Law Wardens over there to help out the Czech moose, all would be well and good.

Yes, we had to sneak them in again because we just love these guys!

The Czech Republic is serious about Game Management. They have a wonderfully illustrated 3-part series available in English which explains their history, policies and practices. We recommend you take a look and that’s why we’ve made the link available here.

Game Management in the Czech Republic Part I

Now remember, wherever you are, there are precious critters and you are likely traveling with precious cargo so drive safely! 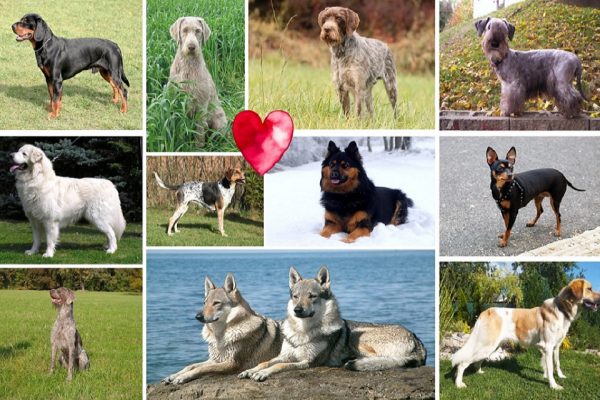