On June 10, 1942 the Nazis wiped Lidice off the face of the earth.  This June 10th marks the 80th anniversary of the horrific massacre of the men, women and children of Lidice – a little village west of Prague that was literally wiped off the map by the Nazis during WWII. The men were shot, the women sent to concentration camps, and the children were taken away to never return.

In this post we’ll look at two documentaries – The Silent Village and The Second Life of Lidice – that re-live the horrors of the tragic event eighty years ago.

Out of a total 503 inhabitants, 307 women and children were sent to a makeshift detention center in a Kladno school. Of these, 184 women and 88 children were deported to concentration camps; 7 children who were considered racially suitable and thus eligible for Germanisation were handed over to SS families, and the rest were sent to the Chełmno extermination camp, where they were gassed. After the war ended, only 143 women and 17 children returned.

The village was set on fire and the remains of the buildings destroyed with explosives. All the animals in the village—pets and beasts of burden—were slaughtered as well. Even those buried in the town cemetery were not spared; their remains were dug up, looted for gold fillings and jewelry, and destroyed. A 100-strong German work party was then sent in to remove all visible remains of the village, re-route the stream running through it and the roads in and out. They then covered the entire area the village had occupied with topsoil and planted crops, and set up a barbed-wire fence around the site which had notices reading, in both Czech and German, “Anyone approaching this fence who does not halt when challenged will be shot”. 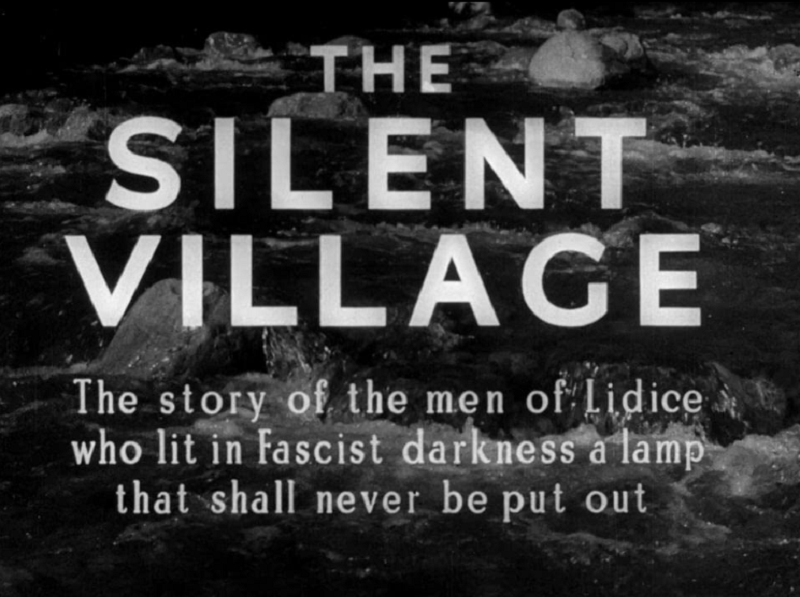 The Silent Village is a 1943 documentary short (36 minutes) about the massacre of a small Czech village by the Nazis. The interesting thing about the film is that it is retold as if it happened in Wales.

I know… That sounds strange, but Director Humphrey Jennings created a masterpiece with this film.

Imagine that you are in the village of Cwmgiedd. It’s a tiny mining community in southern Wales. The men work in the mines and come home or head to the pubs, singing “Men of Harlech”; the women are at home cleaning; the children are at school, learning about the solar system and Wales. It’s an ordinary place…

Now imagine the same things happened here that had happened in a similar village in Czechoslovakia.

Watch the people of the Welsh village reenact what had happened in Lidice, where the Nazis had come in an destroyed, everything standing, including root and branch, in retaliation for Reinhard Heydrich’s assassination attempt.

The murder of Reinhard Heydrich, whose assassination (Operation Anthropoid) by British-trained Czech agents in Prague led to the actual Lidice massacre. The film was designed as a tribute to the mining community of Lidice, Czechoslovakia, which had been the scene of the appalling Nazi atrocity on June 10, 1942 when its entire adult male population (173 men and boys over 16) was executed and all 300 women and children sent to Nazi concentration camps, which few would ultimately survive. News of the massacre caused much shock in the UK, particularly in the coal-mining areas of the country. The film recreates events in Lidice but transports them to a South Wales mining community to indicate that if the German invasion of Britain had been successful in 1940, then the kind of atrocities currently being perpetrated in German-occupied Europe would just as likely be happening contemporaneously in the UK; also as a reminder to the British people of what they were fighting against.

The film is produced and directed by Humphrey Jennings, the great propaganda documentarist of the General Post Office. The cinematographer is H.E. Fowle. Together they had done London Can Take It!, and they use the same techniques here. It’s all beautiful portraiture and landscape, and people stoically going at their work in stoic pride. A beautiful piece of propaganda, asking how you would feel if it happened to you.

You can watch the film here:

On its release, the film gained a reputation as a particularly pertinent, powerful and moving short film.

Contemporary opinion places it among the products of Jennings’ most fruitful period as a director alongside Listen to Britain, Fires Were Started and A Diary for Timothy. Dave Berry of the British Film Institute notes: “There’s a civilized reticence about Jennings’ treatment…but overall (he) instinctively finds the right tone. A constant fear of reprisals permeates the film. In domestic scenes, the locals’ impassivity, listening to their radios, compounds the sense of oppression. Stilted acting makes its own contribution. There are no glib, articulate spokesmen here and Jennings, using light and shadow well, suggests a stunned community awaiting the decisive blow.”

In a wider discussion of Welsh industry in film, BBC Wales said: “Jennings’ penchant for understatement and striking imagery carried its own force – and the film, calling for solidarity among miners faced with the German threat to freedom, was instrumental in forging enduringly strong relationships between Czech and Welsh miners, in particular.”

Druhý život Lidic | The Second Life of Lidice is a 2002 documentary (58 minutes) This documentary points out the changing view of a tragedy which took place sixty years ago. Director Štingl includes world reaction to the incident, but primarily develops ideas found in ‘The Silent Village’, a 1942 documentary shot in Great Britain by Humphrey Jennings. The Czech Protectorate press deemed the action just retaliation for the assassination of Reinhard Heydrich. After the Communist takeover, Lidice was mainly used for propaganda purposes: at the time fascism and imperialism were spoken of interchangeably. The documentary takes advantage of the intensity of period contrasts and of the personal reminiscences of people in both the Czech Republic and Great Britain.

The following film features memories of Cwmgiedd born Arwel Michael who appeared in the 1943 Humphrey Jennings film The Silent Village.

When news of the Lidice massacre broke, the international community responded with outrage and a promise to keep the town’s memory alive. President Franklin D. Roosevelt released a statement praising the gesture: “The name of Lidice was to be erased from time,” he said. “Instead of being killed as the Nazis would have it, Lidice has been given new life.”

Other posts we’ve written on the subject:

Memorial to Lidice by Bohuslav Martinů