The Tale of the Headless Gingerbread Men

Two weeks ago, we wrote about the mysterious legend of The House at the Golden Well (Czech: Dům U Zlaté Studně), which follows the story of Ľubomíra, a housemaid who fell into the house’s well while looking for gold and died. According to the legend, her ghost continued to haunt the building for many years after her death. However, as we mentioned in that post, Ľubomíra was not the only ghost to haunt The House at the Golden Well.

In todays post we will take a look at another frightening legend about The House at the Golden Well. 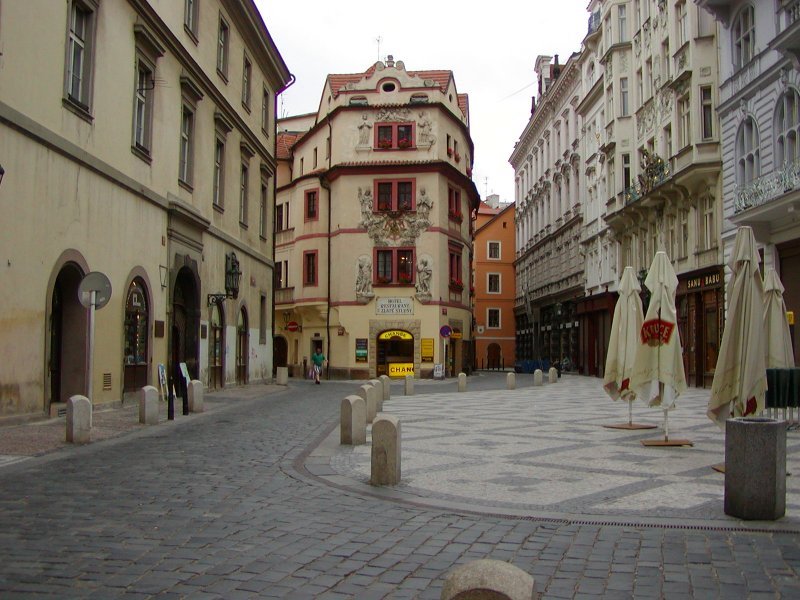 According to this cryptic legend, a Spanish Knight and his Lady were both killed in The House at the Golden Well during their stay there. During that time, the building served as an inn for travelers.

After their mysterious murder, the ghosts of the decapitated Knight and his headless wife continued to wander the halls of the house at night, for years to come. Since the circumstances and details of their death were unknown, no one knew how to release them from the building or to set them free. That is, until a baker moved in. 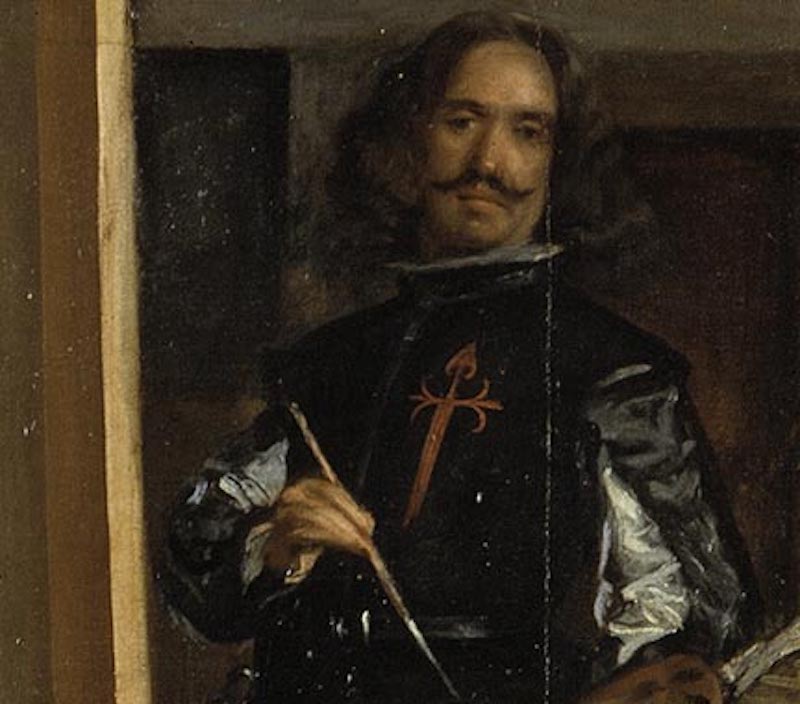 Many years after their strange death, a baker, who was honest and skilled, moved into The House at the Golden Well. He was exceptionally talented in his trade and baked all sorts of delightful pastries, rolls, and cakes, some of which were dusted with sugar and others which were filled with poppyseed or plum preserves. However, he was especially good at baking gingerbread and made all sorts of beautifully decorated and different shaped gingerbreads. 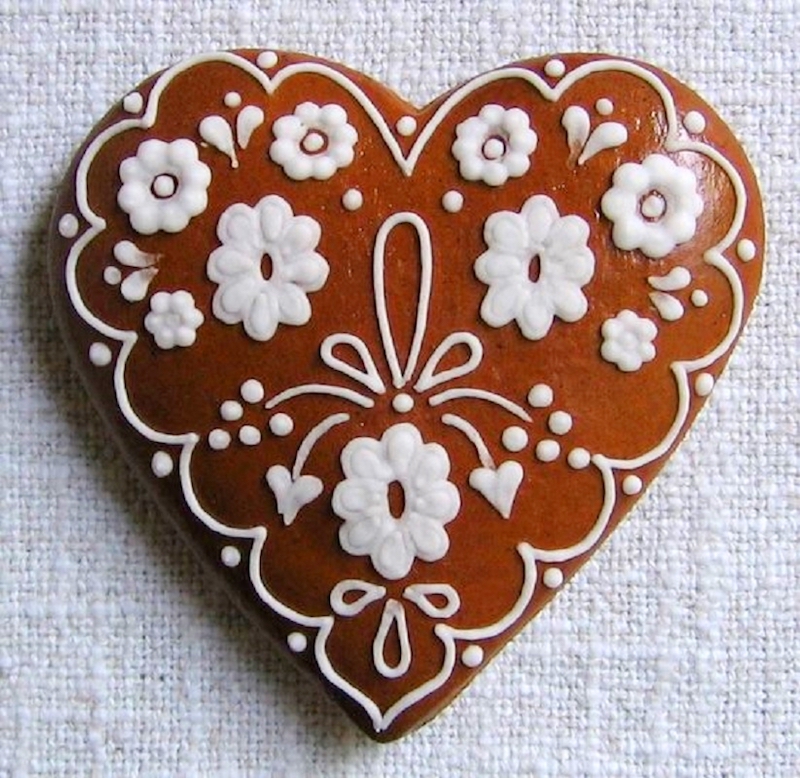 He was a smart man and he was always looking for new shapes and designs of gingerbread to try, in order to keep his customers coming back for more.

One evening as he was rolling out the spiced dough and cutting out the different shapes, such as hearts and angels and stars, he decided he wanted to try something new. As he was thinking of ideas, he recalled the legend he had heard about the Spanish Knight and his Lady. The legend of the headless couple was quite well-known in the area and so he decided to make some gingerbread figures of the Knight and his wife, hoping that they would sell well with his customers.

However, he thought it unlikely that people would want to buy gingerbread figures without heads, so he gave them heads of his own invention. He continued his baking for the night and once he was finished, he went to bed.

In the morning, he went into the kitchen to find that all of the gingerbread figures of the Knight and his Lady were missing their heads, which had been carefully broken off and thrown onto the kitchen floor. He called in everyone who worked in the house, the maids and his assistants, and asked who was responsible for the unpleasant surprise, but they swore they knew nothing about what had happened. 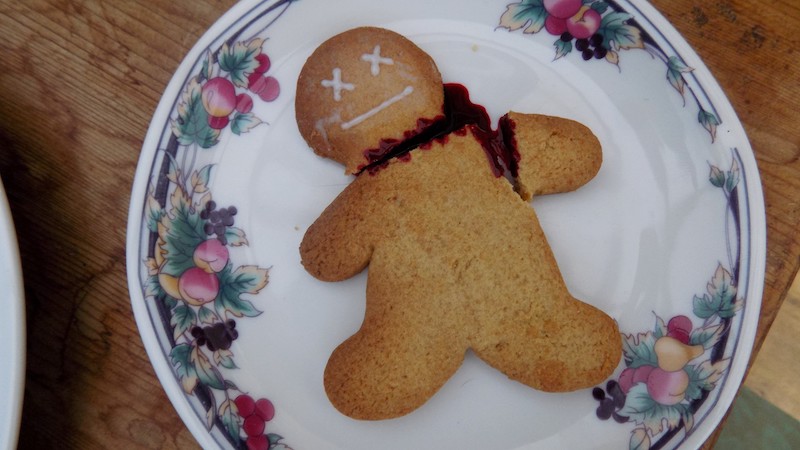 The following night, he baked new figures and, once again, left them out to cool. However, this time, he locked the kitchen door before going to bed so that no one could get inside. In the morning, however, he awoke to find that, regardless of the door being locked, the heads were missing yet again.

The baker was sleeping soundly, when suddenly he awoke to find the ghosts of the Spanish Knight and his wife, carrying their heads in their arms. The knight was angry at the baker for creating figures which looked like them, but whose heads did not resemble the Knight and his wife. He spoke to the frightened baker and told him to take a good look at them, so that he could capture a true likeness and make the gingerbread properly.

“‘You have made our gingerbread figures according to how we look,’ said the knight, ‘but our heads are of your own invention. We have therefore come so that you can copy our real heads. But hurry! Before the hour of ghosts is past, our heads must be back in the Vltava.” – Alena Ježkova, 77 Prague Legends

Now the baker had to make new figures which accurately captured the image of the Knight and his wife or else the ghosts would punish him for making light of their plight. He had to work quickly though, as he had just one hour between midnight and 1 am to complete the new tray of Spanish knights and Ladies.

He prepared the dough, rolled it out, and cut out the new figures, giving them heads which matched those of the ghosts. Once he was finished, the ghosts examined the figures. Fortunately for the baker, they were pleased with the results.

“You have done your work well. If you had botched it, you would now be a head shorter as punishment for wanting to make money from our misfortune. But now you may set us free, and moreover find great wealth.”

He then proceeded to tell the baker of how they were killed and how he could help to set their spirits free.

According to the knight, he and his wife came from Spain in order to pay their respects to distant relatives in the Bohemian court and to visit the famous Infant of Prague statue.

They stayed in a room at The House at the Golden Well, which was an inn at that time. However, once they had fallen asleep, the innkeeper snuck in and killed the couple so that he could rob them. He dismembered them, cutting off their heads and later tossing them into the Vltava river so that no one would be able to identify the bodies. Then he dragged the headless bodies into the cellar and buried the headless corpses there, in the basement. 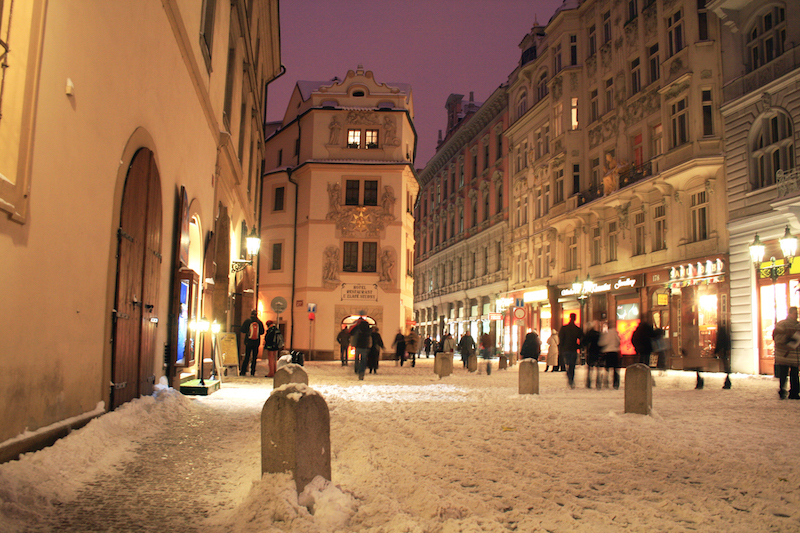 The couple was smart though. They had carefully hidden their traveling money and their riches and so the innkeeper got nothing for his murderous ways.

The knight told the baker,

“If you wish to set us free, you must dig up our bodies and bury them in the cemetery. If you do so, the treasure will come to you of itself.”

If the ghosts’ bones were moved to a proper cemetery, they would be free to rest for eternity and the baker would receive a reward.

The following day, the baker went down to the cellar were he began digging up the floor. After some time, he found the remains of the unfortunate couple. He arranged to have them moved to a cemetery and placed in a proper grave.

Shortly afterward, the steps leading to the cellar collapsed, taking part of the wall with them. Behind the broken wall, the baker found a heap of golden coins.

The ghosts of the Spanish Knight and his Lady have not been seen in The House at the Golden Well since then.

Quotes taken from the book 77 Prague Legends by Alena Ježkova.

Facebook Comments Box
NOSTALGIA, Time Warp
Back in Time
Jawa 350TS Motorcycle with Velorex Sidecar
All About Doggie and Pussycat: A Czech Classic of Children’s Literature