The Ride of the Kings has been inherent in folklore since time immemorial. But the Ride in Vlčnov is extraordinary and the most famous one and has existed for hundreds of years.

According to extant records, the ride of the kings has been in the village since 1885. Ten years later the boys from Vlčnov in Prague showed their ride at the Czechoslovak Ethnographic Exhibition.

The Ride of the Kings is celebrated in Spring, at the Pentecost, in Moravia, the south-east of the Czech Republic. It takes place in the region historically known as Moravian Slovakia. It is celebrated annually in the village of Vlčnov (pop.3,000), every three years in Hluk (pop.4,400), every two years in Kunovice (pop.5,500), and occasionally in Skoronice (pop.550) as part of another festival called the “Slovácký rok” (Slovak Year).

The following is a major film monument to the Ride of the Kings in Vlčnov from 1949. Filmed in 16 mm format by Mr. Stanislav Bdinka, it is one of the oldest film recordings of the Ride of the Kings in Vlčnov. A visual celebration of the beauty of traditional folk costumes of the region, we’re happy to share this rare glimpse with you. (7 minute film.)

Until World War II, the Ride was an integral part of the Feast of Pentecost, but has since become largely a social event. The ceremony begins with a religious service and the approval of the Mayor, followed by the preparation of the costumes and decorations for the horses and riders. These are made by the women of the villages, according to traditional colors and designs unique to each place.

The habit has its roots in the pagan age, when the boys competed among themselves in the expulsion of cattle. The best was crowned the king.

Others see their roots in the escape of Hungarian King Matthias Corvinus from George of Podebrady. In order not to reveal his appearance and speech, he dressed in a woman’s costume and put a rose in his mouth.

The principal point of the festival is the actual Ride of the Kings. It is a procession of riders with the King among them riding a white horse and wearing a girl’s national costume, with a rose in his lips as a sign of his silence.

At the sides of the King ride two adjutants, protecting him with their unsheathed swords. The riders chant witty verses to praise the King or to ask for presents for the King.

What does all the show actually mean? The tradition is related to initiation. The riders in the King’s entourage are young, 18-year-old men who in the past were to be recruited.

They have to demonstrate that they are able to ride a horse and are no longer little boys. The “recruits” collect presents for the King – a little boy from a local family – from spectators.

The bright and merry event has attracted many artists. At the end of the 19th century, the celebration was immortalized by Joža Uprka in his most famous impressionistic painting, The Ride of the Kings. The region was also visited by Rodin, the French sculptor, and Alfons Mucha, the Czech painter. The serial Slovácko sa súdí (Moravian Slovakia on Trial) was partially filmed on locations in Vlčnov in the 1970s.

The event is accompanied by folk music, singing, dancing and of course excellent food and wine. And good home-made plum brandy is indispensable, too.

The specific practices and responsibilities of the event are passed down from generation to generation.

Below is an English-speaking documentary (10 minutes) teaches about the festival. (© 2010 by National Institute of Folk Culture)

The festival attracts thousands of visitors every year, and many of them come again regularly. The uniqueness of the Ride of the Kings in Vlčnov consists in the fact that the boys ride in the King’s entourage only once in their lives.

For its uniqueness, Ride of the Kings celebration was included on the UNESCO World Heritage List of Human Intangible Cultural Heritage on November 27, 2011.

Many more lovely photographs and videos at the Ride of the Kings website. 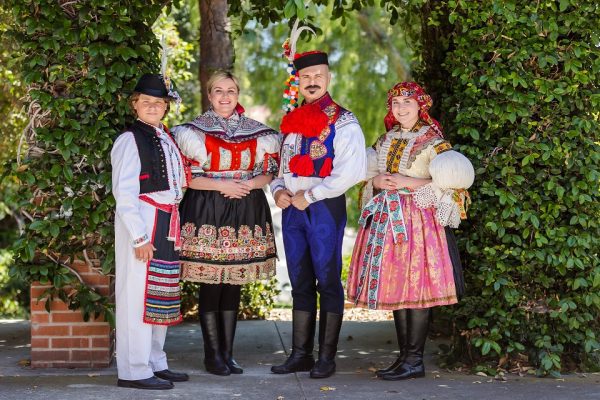