I just learned that there is a new film starring Ben Foster as the Czech hero Jan Žižka, entitled Medieval in the United States and Jan Žižka for Czechs. It is a historical epic which will hit Prague cinemas on September 8, 2022 alongside a limited release in other markets including the United States on September 9, 2022.  So if you’re in the mood for a movie this weekend – this is the one to go to! 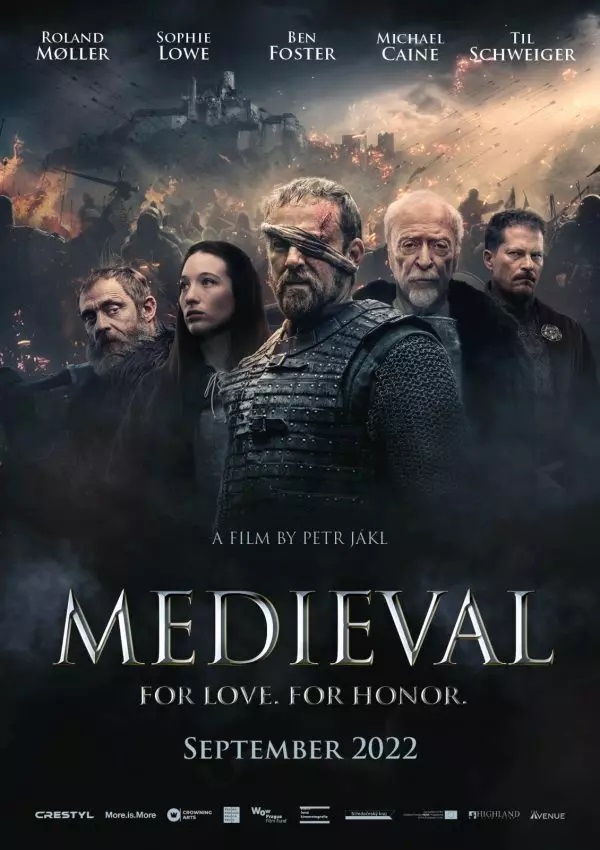 The film is inspired by the true story of Jan Žižka, one of the greatest warriors in history. After the death of its reigning emperor, the Holy Roman Empire is plummeting into chaos while feuding brothers King Wenceslas of Czech and King Sigismund of Hungary battled for control of the empty throne.

Daring and righteous mercenary leader Jan Zizka (Ben Foster) is hired by Lord Boresh (Michael Caine) to kidnap the powerful Lord Rosenberg’s (Til Schweiger) fiancée, Lady Katherine (Sophie Lowe), to prevent Rosenberg’s rise to power alongside the corrupt King Sigismund. Jan believes that Kings are the right hand of God and should be respected and obeyed, no matter what.

For honor. For justice. For freedom.

As Katherine becomes caught in a dangerous political game between the monarchs, Jan falls in love with her strong spirit and dedication to saving the people. In a brave attempt to liberate her, he fights back with a rebel army to battle the corruption, greed, and betrayal rampant amongst those clawing for power. Jan now realizes that the fate of the Empire will be decided by his love for Lady Katherine and that his fate doesn’t lie in the hands of Kings, but in the hands of his own people.

At an estimated budget of $500 million crowns (approx. $22,000,000), Medieval is being billed as the most expensive Czech movie ever made. The movie was shot four years ago, during the summer of 2018, ahead of a lengthy post-production process that included postponements due to the pandemic.

Below is another trailer for the film…

List of full film cast and crew is here.