Atop a hill in a small town North of Prague, where the Labe and Vltava rivers meet, the Mělník Castle (Czech: Zamek Mělník) stands out brilliantly against a bright blue sky. Leaves fall away, clouds drift by, and yet the Castle stands still, seemingly unchanged with time, even as everything around it changes. However, despite its unfaltering appearance, Mělník castle, much like the landscape that surrounds it, has undergone several changes over time.

Mělník castle, which was originally built entirely of wood, was built in the 9th century. Throughout the many years that followed, it underwent various changes, not only in the building materials used, but also in the architectural style of the castle. It was first rebuilt in stone in the Romanesque style. Later, it was rebuilt in the Gothic Style. It was not until the 16th century that the castle was rebuilt once more, this time in a Baroque style, which is the style which remains to this day.

This Renaissance castle is the most important landmark of Mělník, a town which is otherwise known as one of the most significant agricultural areas in the Czech Republic. Mělník produces fresh fruits and vegetables, sugar, beets, and wine. In fact, Mělník is where the first vineyard in Bohemia was planted.

Annually, toward the end of September, when the air begins to cool and Summer reaches its end, a wine festival is celebrated in the town of Mělník. The festival takes place every year on September 28th, on The Feast of Saint Wenceslaus.

Aside from the interesting history and the splendid church of Saint Peter and Saint Paul which is located across from the castle, Mělník castle is also known for its ancient vineyards and the vast wine cellars which lie beneath the castle.

The castle was later confiscated by the communists. However, after the fall of communism in Czechoslovakia, it was returned to its owners, the famous Lobkowicz family. With its extensive wine cellars, elegant interiors, and fascinating history, Mělník castle an excellent place to visit for those seeking to immerse themselves in Czech culture and history.

Thanks to the independent film makers who have begun using drones to film flyovers, you can now watch a short 2-minute film of this lovely castle and it’s surroundings. Just click on the photo below to watch… 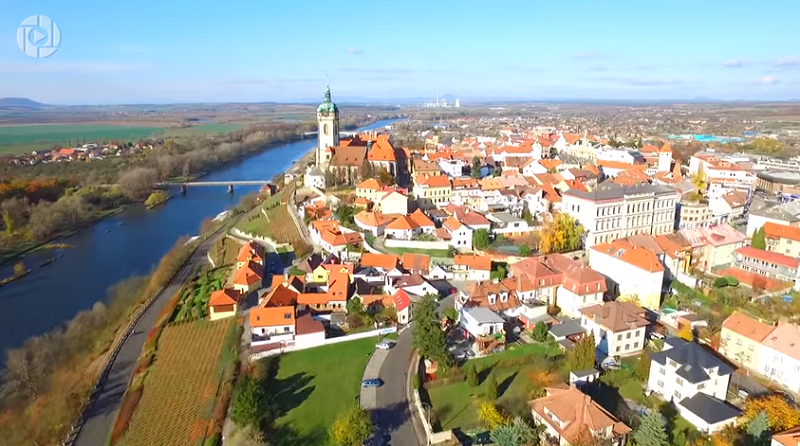 We hope you enjoyed today’s post! Please remember to leave your comments below.